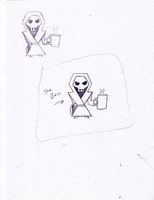 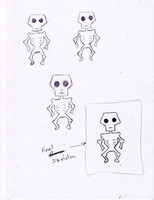 That next morning the second level was cut.

This wasn't an easy decision. Just saying it like that undersells the emotions though. As we planned the game on Friday, we had envisioned 3 levels, a 'Dragon level, an undead level, and maybe a slime level because that will be easy to throw together if we hit a time crunch, and easy enough to cut if we have too!'. But Sunday we were now down to 1 level.

As I worked alone the first few hours of the morning (I was one of the only ones on the team with kids, so my wake up time is pretty fixed), it was clear we were not going to be able to submit on time if we split our focus on two levels. If you've played Kobolds of OSHA, you know the 'boss fight' is a pretty extensive dialog tree. 456 lines of JSON to be exact. Less apparent is that the dialog battle for the second boss, the Lich was written, tested, and ready to go on Saturday night. I didn't know how I was going to tell the writer, that his work wasn't going to be seen.

Professionally, while not a game dev, I do have my share of projects to manage. Managing people is hard, and telling someone their hard work was essentially wasted, is devastating. I knew going into this that cuts would have to be made, and there were, extensively, all throughout Saturday. Cut 'random dialog' with the dungeon inhabitants (little was written, anyway). Cut dungeon hazards hurting the player (it's not the gameplay focus after all). Cut new tilesets, we're going with recolors (they were started, but weren't complete yet). Cut the slime dungeon, it was optional anyway (the sprites are done? We'll use them for dressing elsewhere)… the list goes on and on.

But level two was going to be there. We had so much art done for it already. The writers had split the boss fights and were working in tandem. Surely I'd have time to put both in. I just needed to finish the dialog engine first, that was core gameplay after all. And the inventory engine so you could collect the citation card, that's also core to the gameplay loop. Tie that to the event system that's mostly running and... what have I been doing the last 12 hours when so much that's core to the experience isn't done yet! I don't even have a start menu yet!!!

My daughter woke me up at 4am Sunday morning. She was settled quickly after she was given her binkie back but she'd be back up at 5:30 anyway. I promised I wouldn't work on this to the determent of my sleep, and I kept to that, but I had plenty of time to think as I fell back asleep. The answer was obvious. There was too much to do, and we could either polish one level, or have two sloppy levels. The ax was falling and my team mates were going to awake soon. Resolve. Breakfast and resolve.

Things got crazy fast that morning. I didn't get to play our game again until after submission. Art assets, SFX, music, animations, all of it was pushed my way and dropped into test build after test build. As peoples tasks were finishing up, bugs were found, interrupting tweaking the menu, or fixing the dialog engine (wasn't completed until NOON, how thankful we were for that extra hour). The writer who I was so worried about hurting, took it in stride. Maybe he knew already this was a possibility. He jumped in to help with the writing for the first level, fixing bugs and making it the best damn script we could ask for.

It took a stressful 45 minutes to submit everything properly. Nothing is perfect in a game jam, but I'm proud of what we did. With one programmer, a physics professor, an environmental scientist, a lawyer, a massage therapist, a bartender, a handyman, a post doc, a non digital artist, and a 3d modeler (for our 2d game); we beat the odds and submitted on time.

Cutting level two was the right choice. But I'll always be grateful for the work everyone put in to try to make it happen.

The Kobolds of Osha